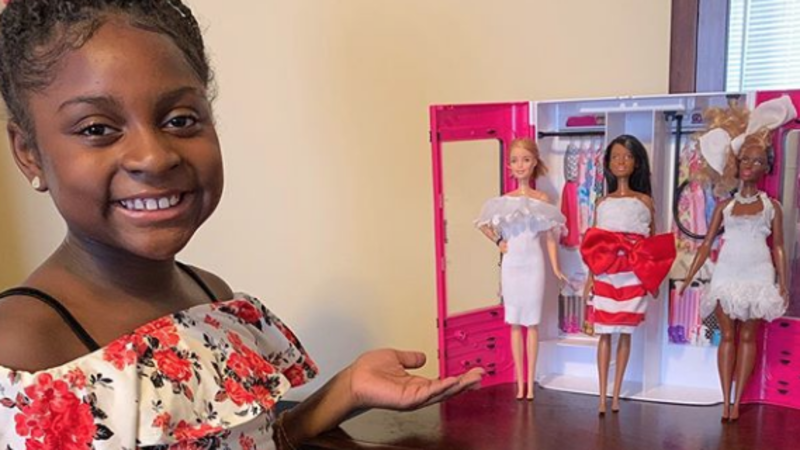 The 9 years old Nevaeh, who is also the youngest entrepreneur has plans of starting her own business called SaSha Sew Amazing and wants to encourage other like herself to follow their dreams.

Her creative skills caught the attention of Mattel, the manufacturer and owner of Barbie. The 9 years old is known as Nevaeh Woods, a Michigan native, started designing custom wears for her Barbie dolls using household items like gemstones, socks, ribbons and scissors, according to WDIV reports.

Her mom, Sha’kvia Woods, said she is always amazed by her daughter’s creativity and encourages her to pursue her dreams of being a fashion designer. However, her mom was so carried away that she shared a picture of her to Facebook. her mom said, “I just took pictures of them, so I was really amazed I shared it to Facebook and then I got a lot of my friends say make this public and when I made it public it just went viral.”

Nevaeh designs did not just caught the attention of family and friends, but she also gained an unexpected fans that she received a brand new Barbie dolls from Mattel to style. “Barbie sent me this amazing box,” she said.

Out of her excitement by the outstanding support Nevaeh got, she made a Youtube video appreciating everyone.

“Because of you I’m closer to my goal of becoming a fashion designer,” she said as she thanked her parents for believing in her and supporting her, telling her “that dreams can come true.”

“feel special because I’m achieving my goal to be a fashion designer and that’s what I really want to do.”