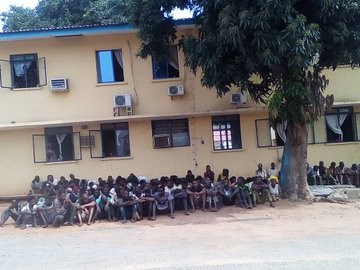 According to source 144 male and female looters suspects were arrested for participating in the destruction and looting of Kwara Agro Mall, Ilorin Airport Cargo warehouse and Kwara Mall also known or popularly called Shoprite during the weekend.

However, the 144 suspected looters were command paraded with many looted items discovered from them on Monday, October 26, by the Kwara state police officers.

Kayode Egbetokun who is the state Commissioner of Police appreciated the people of Kwara State while parading the suspect for the co-operation in its effort of arresting the 144 looters suspects and the recovering of items looted, he however encourage other suspects that are yet to surrender some of the stolen items with them to do so as soon as possible to avoid been traced and arrested