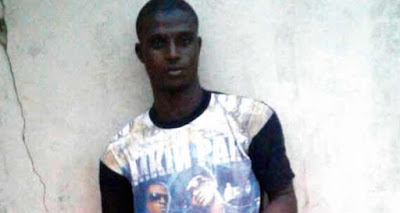 23-year-old barman, Samson Michael, has been arrested for the murder of
his neighbour, Tobiloba Osho, by the Lagos State Police Command.

Osho reportedly bled to death after he was stabbed in the chest by
Michael during an altercation in their residence on Mabayoje Close,
Alakuko area of the state.

A 17-year-old daughter of the pastor of a church where Michael lived had
accused him of sneaking to where she slept inside the church in the
midnight of Thursday, September 13 and fondling her pants.

Osho’s next-door neighbour, who gave his name only as Kola, said he was
in the bathroom when the fight broke out, adding that he tried in vain
to caution the deceased.

“Samson (Michael) was an in-law of the pastor. His sister is the
pastor’s wife. The girl in question is the pastor’s daughter from his
first marriage. Samson and the girl usually sleep in the church.
“That Thursday morning, the girl told Tobiloba (Osho) that Samson
touched her pants while she was asleep in the night. After a few hours, I
heard Tobiloba and Samson exchanging words over the issue. I was in the
bathroom. I asked Tobiloba to be patient and wait for me.

The deceased was rushed to some private hospitals in the community
before he was taken to the Ota General Hospital, Ogun State, where he
was confirmed dead on arrival.

The Lagos State Police Public Relations Officer, CSP Chike Oti, who
confirmed the incident, said the suspect had been transferred to the
State Criminal Investigation Department, Yaba for further investigation.