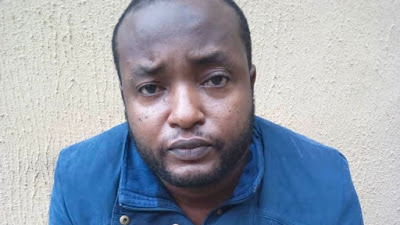 The police in Lagos State have arrested a 31-year-old man who has
allegedly been parading himself as an army colonel to molest and extort
unsuspecting members of the public.
The suspect, Harry Perry Obiajuru, popularly known as
‘Colonel Harry’, was said to have always gone out with two soldiers who
posed as his orderlies.

He also usually drove in cars whose plate number was concealed with the United Nations plate cover permit.

Recovered from his apartment in Shasha area of Lagos were a pump action
riffle, two military camouflage caps, a sword, horsewhip and two vehicle
plate covers on which were inscribed UN Officers car park permit.

Investigations, according to the police, revealed that in February,
Obiajuru and the two soldiers that had been acting as his orderlies,
stormed a hotel in Shasha to compel four youths who refused to pay after
spending four nights there.

They were alleged to have beaten the youths (three males and a female)
with horsewhip before dragging them out of the hotel, when they claimed
they were not with cash.